I’m sure when you were a child there were places that you saw on TV and in books, that you thought looked amazing but never expected to visit?

One such place for me was Komodo Island. I remember being told by my grandad that there was a place where dragons still roamed wild. (Nowadays, I would have asked him if he meant as opposed to in a zoo – but that’s because I’m a much more cynical and sarcastic person today).

He said there was an place at the far east of a chain of islands where you could see these magical beasts. He then showed me pictures of said beasts eating a deer and I had nightmares for a week – but that’s because this is real life and not a fairy tale.

It turns out that this island chain was Indonesia and it’s the largest chain of islands in the world with Komodo being just one of 17,000 islands. (Archipelago – the posh name for a chain of islands, in case you were wondering)

My husband and I have now visited a whole bunch of countries (it’s 53, not like I have it in a spreadsheet or anything, oh no). And we’ve mostly done this in three extended trips over the last ten years.

Back on our first trip I was a pretty rubbish traveller.

One of the biggest sins of any new traveller is to try and enforce the culture and attitudes of your own country on the places you’re visiting. So as I’m British, being on time, queuing, not grabbing people’s bags and taking them off to your taxi without asking (this happens all the time in Asia), are quite important things to me.

In Indonesia there is a very different concept of time. It’s very warm there though I guess, which I think must interfere with the clocks.

When we started our first trip we planned to go to Bali, as like a lot of travellers we assumed that once we’d been to Bali we could say we’ve ‘done’ Indonesia.

Actually thinking back, we never really planned this trip at all, a week before we left for Thailand we were meant to be spending 6 months on a Thai island training as diving instructors. Then one evening we were stood making food and we looked at each other and said – ‘shall we just go travelling instead’ – and we did.

This meant that we had to plan as we went. And use guidebooks that we found on the road. The Indonesia one was huge, though had all its maps printed back to front. So when we headed off left we should have gone right. Which is just great when the taxi driver drops you off in the middle of nowhere Jakarta at 1am and you’re looking for the nice hotel named in the guidebook that you have no hope of finding. Ever wonder how you’re still alive? I often do.

One thing the guidebook did do, was show a stunning picture of a Komodo Dragon and of course as we were in Bali, it seemed madness not to try and see the monstrous lizards.

This all happened about 8 years or so ago btw and at the time the only flight company that went to anywhere near Komodo didn’t allow booking online. It had a webpage from what I remember but it just said ‘This is Indonesia; you’ll have to visit the office’.

After a little more research it turned out that you can’t actually fly to Komodo and instead you have to land on a nearby island called Flores. This wasn’t a hardship as Flores is a stunning place full of incredible rice paddies, magical coloured lakes and rats the size of dogs (and not small dogs, real dogs). 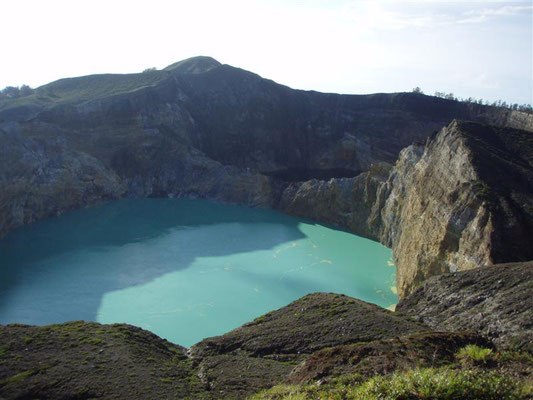 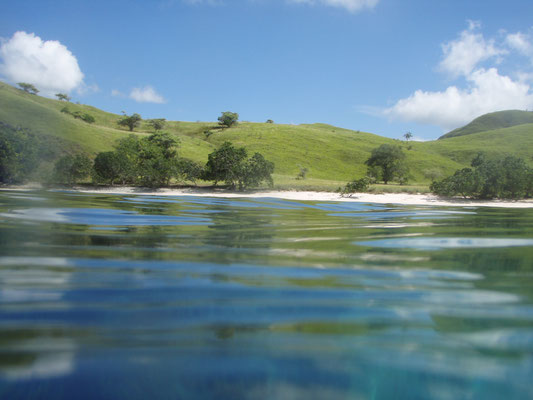 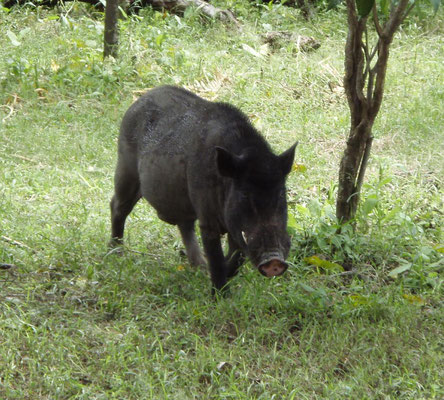 The office for the flight company was at the airport, and after several visits there, as no one seemed to want to admit to working for the airline, we finally got tickets.

We didn’t know at the time but the airline who took us to Flores had such an appalling safety record that they were actually banned from flying in Europe.

Thankfully, the plane was actually okay, though absurdly tiny. So small in fact, that the flight attendant didn’t come around with the inflight meal she just threw them from the front.

On Flores, we landed at the eastern end of the long slender island. There were two airports one at either end, so it made sense to arrive far east and then make our way west back toward Bali essentially.

We visited rice paddies, volcanoes, crater lakes and countless villages full of locals weaving traditional clothing – all of it an off shade of yellow, not quite sure why – if I were a better tourist I would have asked of course. (Turns out Alex knows why, but it’s dull so I’m not writing it here).

In the wonderfully named Labuan bajo on the western most point of Flores we asked about visiting Komodo.

‘Rinca’ We were told. A smaller island in between Flores and Komodo.

‘They have Komodos on Rinca and it’s closer and cheaper.’

‘They have Komodos in the zoo on Bali too, but I don’t want to go there either. I want to see Komodos on Komodo island.’

This was the response from all of the tour companies on the island. It seems that Rinca is closer and better laid out for tourists. Komodo was better suited to the occasional posh cruise that happen to venture past.

Finally, we said ‘there must be a way to get there’ – and in reply a dismissive tour guide said ‘well you’ll have to hire your own boat’.

Which we did. I use the term boat loosely as we are very poor and couldn’t afford anything more than a bathtub with an engine. But after six hours it chugged its way over to Komodo.

The captain said he would wait for us until we’d done. We told him we’d be back in two days, assuming we weren’t eaten and he agreed.

Komodo island is amazing. In the green season when we were there it looks a little like Teletubby land. If Teletubby land had 100% humidity in 30 plus degrees’ heat, making it feel like you can hardly breathe and can’t move without leaving a sweaty puddle.

At the (then unfinished) visitors centre (since then Komodo has changed a lot but I’ll mention that at the end), we were met by a guide.

The guide had a big stick and told us that he would stay with us to make sure the dragons didn’t attack. Which all sounded great until we told him that we were going to stay on the island for two nights.

He wasn’t impressed with that at all. He said that he couldn’t stay with us all that time and he’d show us where we can get food and sleep and then he’d come back for us the next day and take us on a hike. I didn’t want to go on a hike, but he seemed insistent and he did have that big stick.

The café and the sleeping area were rough wooden buildings raised up on stilts as, very much like the Daleks, it appeared people believed that the giant lizards couldn’t climb steps. They can of course, as the American man who was bitten recently will testify, but the steps did at least give a sense of security.

The accommodation was basic and when you bashed the mattress a cloud of black flies came zooming toward your face, but it did the job.

Back at the café we got our first sightings of the dragons. I think I just made that sound like they were hard to spot. They really weren’t, mostly because as much as the tourist info said otherwise, the locals still feed the lizards to keep them nearby.

They are stunning creatures, huge! And they make a low growl like an angry cat. We must have seen at least five or ten of the 3m beasts hanging around waiting to be fed - a sight we actually got to witness the next day.

Komodo is a wild island, there aren’t just the huge lizards, there were packs of deer and far too many wild boar. Wild pigs are beasts that freak me out more than the lizards as they were the stuff of nightmares growing up in the late 70s and being allowed to watch horror films at much too young an age. (For some reason 70s horror films always had a wild boar going mental).

The next day the guide returned and had us follow him to the highest point on the island. A fun challenge in the insane humidity and after he told us that there were 12 different types of venomous snakes in the grass he had us walking through.

The view from the top of this island is still one of the most remarkable that I’ve seen. So enchanting that it didn’t look real.

Though a breathless and sweaty adventure, Komodo island is still a standout from all our travels and one day I’d love to go back there.

Have you visited Komodo island? They were building a huge visitors centre and it recently got named one of the wonders of the world. Has it changed much recently?

Can you think of any places from your childhood that you always wanted to visit? Did you get to them in the end?

Below are some very old videos. Sorry about the picture quality, amazing how much difference 10 years have made - still, enjoy. I'd love to hear from you - Contact - Instagram