When I tell people I have around 90,000 Twitter followers (@danteharker) it is always met with looks of outright shock. Nice people, who understand the concept of tact, will say, ‘wow, that’s amazing!’ though the majority of people will go on to say one of the following:

There over 300 million active users of Twitter each month – which is an insane figure. More insane is that there are over a billion people registered on Twitter – that’s 1 in 7 people in the world!

What I find more interesting and what probably accounts for people’s shocked reaction to my followers is that the average Twitter user has 208 followers. To be clear, I only tell people how many followers I have on Twitter if they ask. I don’t have it printed on a t-shirt or anything (note to self: get a t-shirt made).

The big question then is how come I have so many followers, so many more than the average?

I’d like to say it’s because I’m great and only the very dull should aspire to be average. I don’t say this, of course, because it’s obnoxious.

The real answer is hard work. Well, not hard work, it’s not coal mining or building rocket ships, but it is work and it can be time consuming, though there are some great tools that really help.

Three quick things that I shouldn’t need to say but sadly people appear not to see as important:

The following is what I do to get/keep and engage with followers – first the process or general concept and then the tools I use. I do have to say, the following is only for those with a huge interest in social media or who want to work in the area, it’s really not for everyone.

Some people don’t like this idea as they feel you should grow your followers ‘organically’ and only follow those people in whom they are actually interested. These same people will often criticise people who are following roughly the same number as follow them. I’ve heard:

They say this as if it’s a bad thing and will go on to talk about it not being about numbers, it’s about ‘engagement’.

And, of course, it is, but if you engage with (if you’re lucky) 10% of your Twitter followers it is better to engage with  10% of 50,000 than it is to engage with the much, much lower figure of the person who will be spouting about your follower ratio.

Note: following so many people does make it hard to engage as it means that your Twitter stream will be unmanageable, but that’s where Lists come in and I’ll deal with that later.

Every day I follow the maximum number of people that Twitter allows me to follow. This seems to depend on what mood Twitter is in. In reality it depends on things like the age of your account and your follower ratio (plus lots of other things that aren’t super important here).

I then give those people time to follow me back and, if they haven’t followed me back after two days, I unfollow them.

I do this each and every day.

There are countless tools out there to help you do this and, over the years, I’ve actually lost count of how many I’ve tired. These range from free, right up to £100+ a month (for these prices I’d want them to wake me up with a full English breakfast each morning).

The issue with most of the tools out there is they require you to spend time choosing who to follow and then click on each account. Some make the clicking easier but you still have to push a button for each person you have to follow and unfollow. And, for me, that used to mean several thousand clicks a day.

But then I found Massplanner.  This can do lots of amazing things and is, in fact, a comprehensive social media management tool. But right now I’m talking about Twitter and what I have done, successfully, to get followers so (for now) I’ll leave telling you about the rest of Massplanner’s features to its own website –  here.

Now, rather than doing my own clicking each day, when I have better things to do like providing content to Tweet about, I leave the clicking to Massplanner.

Once you’ve installed the software (tons of tutorials here – it’s easy, I managed), and added your Twitter account you tell the program where to find the people you want to follow. You can do this by keyword or, like me, you can tell it to follow the followers of accounts you like.

I love travel so I’ve told it that it should follow people who follow NatGeo and Lonely Planet. Each of these accounts is followed by several million so this provides the software with lots of options.

You then set some basic options: how many people you want it to follow, when to follow them, how many to follow each hour and so on.  It’s really simple stuff; you set it off and that’s all there is to it.

If your account is new, start easy, follow a low number each day and build up over time.

There is also an unfollow tool which you can set to unfollow anyone who doesn’t follow you back after two days. Set that one off and again it just does it for you without you having to worry.

I wish I’d have found this software years ago. I was sat at 5,000 followers forever until I started following and unfollowing and then I got to around 30,000 after months of doing the process manually.  But then I found Massplanner and haven’t looked back.

Every couple of weeks, and certainly monthly, I give my account a good clean out. There are a lot of fake accounts around and spam, plus people who Tweet only every few months and usually about what they’ve had for lunch. It’s good to clear these out and make room for more active accounts.

For this I use a great tool called Managefillter – it is an easy-to-use tool that will rid your account of junk.

I imagine that if you’re going to the trouble of getting lots of followers, you need them for some reason. It might be just so you can brag about how many followers you have but I’d imagine it’s because you have a product of some kind – a blog, a novel, a burgeoning tap dancing empire etc.

For me it’s my blog, writing and, of course, it looks great on my CV (people pay me for doing social media things). I find it so odd that so many Twitter ‘experts’ have fewer than 1,000 followers – I think practising what you preach is a much better idea.

The thing I enjoy most about Twitter is randomly chatting and posting the junk that comes into my mind. What I don’t like is posting things that advertise me. As a British man, self-promotion makes me feel strange.

But promoting your product is important and it needs to be done consistently.

This again I leave to Massplanner.

As well as helping with the follow/unfollow process, it lets you do all types of fancy things, from simply posting something to your Twitter account to full-on media campaigns. I load it up with Tweets about my blog, about my writing, pictures, basically enough stuff for at least a month and then I leave it to get on with it. I like this because, when it Tweets something like, ‘check out my latest blog here,’ I don’t feel all British and uptight that I’m promoting myself (I just pretend it’s not me).

I follow over 50,000 people and if I sat and watched my Twitter stream zip by I’d go insane. I also wouldn’t be able to chat with anyone or do anything productive.

Once you start following more than a few thousand people you’ll really need to start making lists and then start viewing those lists rather than your entire stream.

Twitter has its own, free, tool to help you do this – Tweetdeck. Lots of people talk about Hootsuite and this is a hugely popular, too. But, like most things with paid plans, it often tries to sell you things and everything it can do and much more can be done with Massplanner. So rather than paying for lots of tools I pay just pay for Massplanner  and then use free tools for everything else.

Tweetdeck is great. When you first load it up you’ll see that it splits things up into columns for you. These you can keep or delete and arrange as you want.

You’ll see your full stream whizzing by. First, pop into Settings (the cog, bottom left) and turn off ‘Stream Tweets in Real Time’ – this will stop the whizzing and your stream will be delivered to you in manageable chunks.

You can then view your followers and click on the interesting ones and ‘Add to list’. Once you’ve done this you can make a column out of the lists and move your main stream out of view.

I keep it simple and have three lists – Main, Travel and Fun – I added some people to each of these at the start and then I added more as people started to engage more actively with me. I also periodically go over my main list and look for interesting people to add to the smaller lists.

The last thing, which should probably have been first, is to note that ‘Content is King’. What I’ve suggested above will get you followers but, if your content is dull, you’ll struggle to keep those followers. Or more likely, you’ll end up only keeping other people who also post dull stuff. Here are some tips that I try and keep in mind when it comes to content:

Lastly, just have fun. I love Twitter, I get the most engagement out of it of all the networks I’m on and think that’s because I don’t take it too seriously and I’ve made lots of Twitter friends on there

*you might have noticed that I sing the praises of a few sites above and most of all Massplanner, this is mostly because I’ve tried so many other sites/bits of software, and nothing has worked so well. For full disclosure, I’m an affiliate with Massplanner so basically if you buy their product through the link on my site I get a small amount of money (they have a fee trail too so you don't have to commit to anything until you love it). 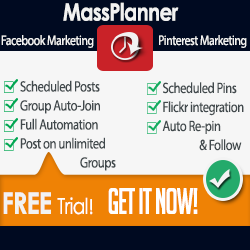 Just to note – I’m not a tech expert, I just blunder on by doing things in the hope that they work. The above has worked for me and hopefully it will for you, too.

What’s the best tip you’d give to get more followers?

Get in touch with on one of the social networks below.

Why not pin this?